This is the last release of this year and a relatively important one suitable for the end of the year.

The new feature is Fragment Shuffle. A shuffle button has been added to Fragments View: 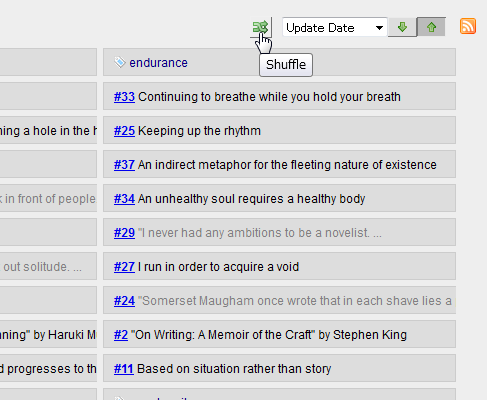 As you can probably tell, clicking on this button will shuffle the fragments that match the criteria in the Fragments View.

Although you might not understand the purpose of this feature well, it is a very important feature in the context of Knowledge Creation, which I’ve explained and will explain in details in the series of articles ‘The Piggydb Way’ and demonstrate in ‘Let’s Play: Piggydb Knowledge Creation‘.

Thank you very much for your support in 2012 and wish you a happy and intellectually exciting 2013!

This is the second installment of Let’s Play Knowledge Creation with Piggydb.

It’s been about three months since the last time. As I wrote on the Facebook page, I’ve been going through drastic changes in my work situation. Even though in such a situation, I’m reading books in spare moments in order to collect materials for new articles. The only problem is the lack of my ability, which slows me down in writing new articles.

Haruki Murakami is a Japanese novelist and probably the most famous Japanese contemporary novelist worldwide. And this book is one of his essays published relatively recently (in 2009).

Here is the passages that interest me in the book:

I squeezed two concepts (‘endurance‘, ‘passed through‘) out of the passages this time, but didn’t find any explicit relationships between the last time (Stephen King) and this time. Naturally, only two books should by no means lead to any remarkable structure. So I should concentrate to input more material for the time being.

A small release to get the rhythm again … 😉

This release adds a description label to Fragments View: 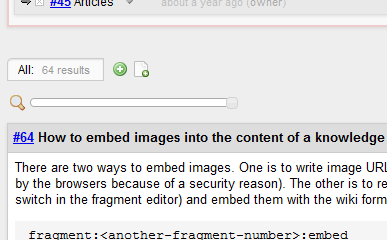 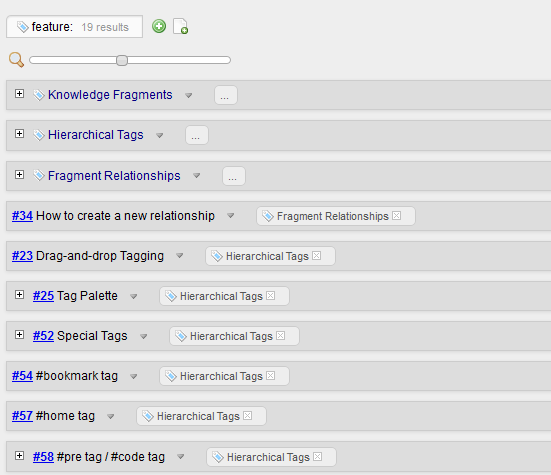 As you can see in the above screenshots, the label also shows the number of found fragments.